Few towns the size of Bishop’s Stortford can boast two England Squash-listed clubs. BS Squash Club at Silver Leys has been around since about mid-last century and the other club in town Chantry Squash Club in Cricketfield Lane, was formed with the building of two courts at the BS Sports Trust facilities in 1978. A number of players have progressed to joining the bigger club from Chantry over the years and the club has wished them well.

The progression of some Chantry players was in evidence on Thursday 7th December with the resumption of a competition between the two clubs that was suspended some years ago. A trophy called the George Smith Memorial Cup was presented to the two clubs by George’s family and the annual competition inaugurated. There is more to the story. George had been a member of a third Bishop’s Stortford squash club, called the Links Club that was established at BS Golf Club at its old clubhouse site close to the Nag’s Head in Dunmow Road. When the clubhouse was relocated Links Club was disbanded. That was in the late 1980s. The club had a thriving membership at the time and while the club’s passing was recognised as a blow by lovers of the sport, it sparked a bit of a brawl between the two remaining clubs determined to win new members.

George chose Chantry and came with a number of others. The BS club too welcomed new members and to this day many of those members are still playing at the same clubs. Sadly George died suddenly just after coming off court at a Sunday club night at Chantry in 1994 despite friend’s attempts to save him.

So, last Thursday after some years and a spike in the rivalry between the two clubs due mainly to the progression at the start of this county league season of yet another Chantry player to the other club – but this time no youngster, the hurt resulted in time-honoured fashion in a duel and the George Smith Memorial Competition was chosen as the battleground and the splendid trophy the symbol of superiority.

To balance the team strengths Fred Cooke of BSSC and Carl Noffki ex-Chantry duly seeded two teams of nine, some of whom had county squash league experience. The novelty was that two of the ex-Chantry players, Gavin and Carl Noffki were to represent their old club against the top two players in the BSSC team. It had been the aim of the original George Smith Competition to enlist the ex-Links members of the two clubs in the competition as the camaraderie was still current when the trophy was minted. Thus as many as possible of those ex-Links members still treading the boards were told of the resumption of the competition and notably Carl Holly of BSSC and Les Argent of Chantry played a racketball match.

And so to the arena, and on this occasion this was the two courts at Chantry. The tasteful trophy had been stored at Chantry as the holders and it was polished and displayed and admired by all. The stage was set, the format was to be nine matches, best of three games in each case. First there was the usual argument about who was marking. On court two Les and Carl played their racketball match out with rather more grace and less noise than was coming from court one where Fred Cooke was getting some stick for turning out in a Paisley pattern bandana to contain his petulant locks. His opponent Carl in Chantry colours practised dutifully while Fred entertained. Then we got going and Carl was making some unforced errors. The game is cat-and-mouse at this level – length, length, every stroke, keep your opponent at the rear while looking to stretch him or get the ball in the nick so you get a chance at a winner. The less mistakes the more medals. Carl was coming back, Fred made a couple of errors and Carl indeed took the first game to loud applause from Chantry team onlookers. Fred was rather more determined in the second game, still flamboyant but with outrageous shots to go with his headgear he took the second game comfortably. The third was slipping away from Carl with Fred displaying his substantial squash talents to the full but when close to match point he seemed to lose concentration and Carl capitalised and clawed his way back to match point himself. In that rally Carl had a clear-cut opportunity to claim the point since an uncharacteristically poor strike from Fred left him marginally in Carl’s way but Carl chose to play the ball rather than ask for the marker’s opinion knowing there probably would have been no winner available and went on with the rally which Fred took. Fred then took the final point leaving Carl kicking himself. But a very entertaining match was enjoyed by the onlookers and the night was still young.

Les and Carl, gentlemen throughout their match, were in the bar by this time and both being ex-Links members were interested in a Chantry membership list from 1991 that had been brought along showing many old familiar names who chose Chantry 26 years ago.

Next up for Chantry was Mark Douglas who currently enjoys quite frequent success playing number one in Chantry’s county team and has a chance to confirm his status as club champion soon when the championship finals take place. Mark played Richard Paul and these two were taking it seriously. In a seesaw first game Mark took it by relentlessly putting the ball at the back of the court without going for any winners but could not contain Richard in the second, or perhaps Mark had let up, because in the third he stormed to a 8-0 lead. But then things slid backwards and Richard carefully played his way back to 9-10. Then, however Mark found another burst of concentration and got to within a couple of points of the finishing line. Richard wasn’t giving up without a fight but Mark got there in the end.

The next match between John Grieves of Chantry and Andrew Dobbs of BSSC was even more closely fought. John got the first game and Andrew the second. The third went to John but on another day the result could have been different. On the other court Will Kirkham for Chantry was playing Dan Overett and Will took the first fairly comfortably but then developed a back injury which slowed him down and Dan cashed in, taking the next two games. The next match too was affected by an injury to Chantry’s Simon Murphy who had been out for a while and thought he had recovered enough for this occasion but it was not to be and he went down 2-0 to Steff Burkwood. After that James Argent played Jon Taylor of BSSC and stole the match 2-1. James always keeps us guessing right to the last moment and he did not disappoint his team-mates in this encounter. Jon dug in well to win the second game after James concentrated for long enough to take the first but James eventually recovered his determination and concentration to take the third.

The penultimate match was probably the highlight of the evening as far as squash excellence is concerned. This was actually played between two members of BSSC, Gavin Noffki and Matt Delaney. The twist is that they both began at Chantry and spent a number of years there before their squash developed to a level where a step-up was appropriate. It was decided that Gavin playing number one and brother Carl should be in the Chantry team and Matt would play at one for BSSC. These guys are so quick around the court that winners are not easy to convert. So the ball is sent to the back wall again and again until an opportunity arises to catch the opponent out of position. Matt is carrying a bit of extra weight at present which he says is due to recently starting a family and this has limited his exercise – not everybody’s experience in those circumstances some said. However he is a tall lad and this makes quite a difference even if the mobility is impaired. Gavin was returning everything but Matt played some lightning shots with stunning power and made winners when nothing looked on. Gavin played many fine strokes of his own and he is not used to coming second but on this occasion he was beaten 2-0 by someone who seemed to want to prove something – or was it that Captain Cooke had directed that the points must be captured since things overall were not looking as cosy as some had expected? Matt certainly impressed the Chantry crowd with the way his game has matured and Gavin always impresses.

The final match was Chantry’s Paul Carter against Mark Delhoy of BSSC and looking at the overall scores thus far Paul had a good idea of what he had to do. And he duly did it with a 2-0 win and no disgrace to Mark who did everything he could to bring home the bacon but Paul was fired up and so he should have been after leaving the Chantry team without its number two on Tuesday night for ‘An important business call’. 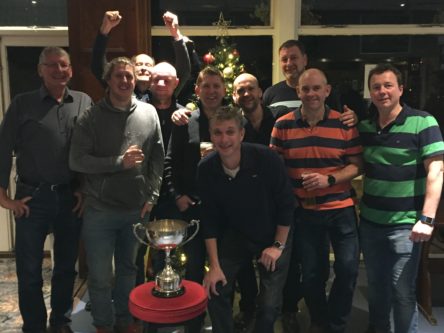 So the final score was tallied in games won rather than matches and the 13-12 winners were the Chantry boys as pictured. Thanks are due to the guys who organised all this, Fred, Carl and Paul Carter.